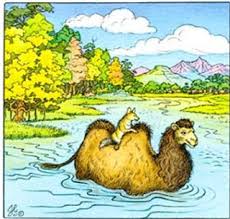 It was a summer season; the sun looked furious and seemed to be very destructive. Grass and small plants were faded, almost died due to lack of water. There was no patch of cloud in the sky. The summer season was going to be longer this year. All animals- small or big were perturbed to see no grass anywhere. They roamed the whole day in search of food and then anyhow they find a little bit of food to survive. There was no idea about how to live in the jungle.

One day a jackal came to a Camel and shared his problem of food to him. Camel and jackal talked with each other. Jackal said to the camel,” Brother, now, it has become very difficult to live in this jungle without food.” Camel also supported to the Jackal and presented his helplessness, “Yes, dear, it is a very critical problem in the jungle. Nothing is left green here. But what can we do? We have to live on the situation.” Then Jackal suggested an Idea. He said, “We should go to the other side of the river. Perhaps, we could find something to eat there. At this, Camel agreed. Jackal: “it is not possible for me to cross the river.” Camel told him not to worry about how to cross the river” Thinking it a great idea, they went towards the river and when they reached the bank of the river, camel said, “Come, dear, come and sit on my back and I will take you to the other side of the river. It was a very nice experience for the jackal to cross the river on the back of Camel.

When they reached the other side of the river, they found fields with some grass and crops. They roamed there and found a field of watermelons. It was a nice place to eat green leaves and fruits of watermelons. They were happy to find the juicy fruits after a long time. They ate to the full and went back to their home. The first-day event not only made a way to the fresh-food destination but also brought them close as friends.  Now it was their daily routine to go there and eat fresh watermelons. Both the friends were very happy to eat to the full every day but the happy days were not for a longer.

One night they crossed the river and started to eat fruits. As the jackal ate to the full very soon and asked the camel to go back. Camel requested to wait for some time more. Then foolish mischief came to the jackal’s mind. He told to the camel that I am feeling howling. Camel requested, No, No dear, it is not good. Someone will hear you and come here.” But Jackal was a foolish, selfish and unfaithful friend.  Hse said, “I cannot help me control me from howling.” And saying so, he started howling. On hearing the howling Jackal, the owner of the filed came with a log. Actually, the owner of the watermelons suspected it that something is wrong with the field. He guessed that there was someone who stole watermelons. It seemed that he was already prepared to find the truth. To find out the fact, he hid behind a shrub nearby and waited till late at night. So hearing the howling of the jackal, he came to the field in no time. At this, Jackal ran away and escaped, but the camel neither ran away nor did hide because of the big body. The owner beat him mercilessly with the log. Anyhow camel could be able to run away from there and reached the river bank.

Then jackal also came there and urged him to make him sit on the back. Camel was very sad. His body was paining a lot. He knew that it was all because of the jackal. That is why the camel decided to teach him a lesson with the idea of Tit for Tat. Therefore, the camel unwillingly crouched and let the jackal climb on the back. Now, the camel with the pain in the body moved into the river. When the camel with jackal on his back went to the middle of the river, he told the jackal, “I am feeling the need to lie down in the river for some time.” On hearing that jackal was afraid of flowing in the current of the river. Jackal requested him not to lie down, but the camel rejected his requests and lay down with his back. The Jackal could not help himself from flowing with the current. At last the camel came to the bank of the river. Thus the jackal found the punishment of the cheating what he made.

Lesson: Always be a faithful friend and make friendship with faithful ones.

Description: Here is a story of camel and jackal with the title “Tit for Tat”. Jackal was unfaithful friends so he got punishment for his cheating.

#Story of camel and Jackal, #Tit for tit, #Unfaithful friend